It’s from an old Berenstain Bear’s book. I remember it very clearly from my childhood. Brother and Sister become monsters in the grocery store because they expect Mama and Papa to buy them something every time they go. Their attitude doesn’t go over well, especially with Mama.

I’ve never gotten my son something from the store on a regular basis, but, I can see what helped this behavior crop up. During Christmas season he was given many kind gifts. Then his birthday and birthday party were in January. It being his fifth birthday, many of his birthday cards had crisp five dollar bills in them. As he was opening his cards, he kept looking at me and saying, “I’m getting rich, Mama!” And he was! However, it only took one shopping spree to clear out his entire wallet. I knew this would be a good lesson for him, so I let him spend all the money, with a gentle reminder here and there saying, “If you buy this and this, you will only have this much left” until it was all gone. So February comes along and we go on a family trip with Grami. Suddenly he expects that whenever we go to a store he will get something.

My son is naturally a pretty obsessive person. He gets it from me, who got it from my Opa: once our brain gets fixed on something, it is so hard to get it off of that one task or object or idea, whatever it is. On our trip, the final straw was my son seeing a seaplane toy from a second hand store and having a meltdown. Now, a meltdown for my son is not throwing himself on the floor and screaming, arms flailing and feet kicking. Thankfully, but for him, a meltdown is repeatedly talking about how he wishes he could have that plane and moaning about not having money to buy that plane, with a little tears and anger mixed in. The. Entire. Rest. Of. The. Trip.

We don’t get to take many family trips. With a family of six and another one on the way, the budget is just too tight. And really, for the kids, the most exciting thing about the trip was the pool at the hotel. Oh, and the visit to the frozen yogurt shop (we don’t have one in our small hometown, so it’s a real treat. For me, of course, it was going to the craft store while the children were with daddy, heehee). But my son’s joy in this trip was stolen, or at least dampened, by his obsession over this seaplane: moaning over how it’s better than all his other planes, how he wishes he had saved his money for it, how he wishes I had the money to buy it (I could have easily bought it, but that wouldn’t have truly helped him). I tried reasoning with him, but the fresh obsession with this toy had taken away any chance of logic making an impact.

He’s been showing a lack of thankfulness a lot lately. We are trying to steer him through it the best we can, but one positive side is that it has made me examine my own life and behavior to make sure I am setting a good example of gratitude for him.

Yesterday, during Bible lesson, we were reading the first chapter of Romans (NIRV), and in verse 29 it is describing wickedness and it states that “They want more than they need.” Sounds like a simple part of the human condition, right? But this behavior was listed right along with murder, cheating, fighting, and hate. It’s a serious thing! God mentions coveting in the first ten commandments that He gives to His chosen people (Exodus 18:21). In Luke 12:15 Jesus warns his disciples, “Watch out! Be on your guard against all kinds of greed; life does not consist in an abundance of possessions.”(NIV). I think I should have that one tattooed on my son’s arm (joking!).

But really, going through this with my son has made me reevaluate how much time I spend thinking about the things I wish I had. Like a new vehicle. Come July, my minivan will have reached maximum capacity, and one of those nine seater SUV’s that I could take out on the gravel bar and in the mountains would be dreamy. Also, our home is an old doublewide from the 1970’s (which are much smaller than modern doublewides!), with rotting floors that rodents have no trouble clawing their way through (shudder!). It would be so nice to have something a little bigger and a little newer. I’ve had chronic pain for the past 6 years, it would be super nice to be free of that…

However, as I’ve told my son, if I spend all my time wishing and dreaming and hoping for the things I don’t have, how in the world am I going to find time to enjoy the things I do have??? 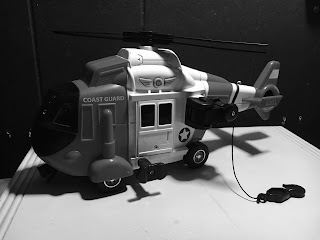 My son's new helicopter, which he was, oddly enough,
very happy with until the "Seaplane Incident".

Proverbs 22:15 says: “Foolishness is bound up in the heart of a child” (NKJV), and I remind myself of this often when I am dealing with my son. It’s my job to steer the little guy to wisdom and understanding. He will get there. In the meantime, I’m going to make sure that I myself don’t fall into the trap of the “Gimmies”. The blessings that God has given me far outweigh all the "wants" I could think of, and I will choose this day to focus on those blessings. He gives us just what we need!

I hope you enjoy the blessings that God has given you this day, Mama, especially those that call you “Mom”.