Have you been working on something for a long time and feel discouraged because it seems like you are getting nowhere? Been there. Lots.

I think you get the picture. I think we’ve all been there.

About three months ago we were harvesting the last of my grandpa’s kiwis for him. He has huge bushes, and we eat off of the delicious fruit for weeks.  I have tried to get starts from his vines in the past but never have been successful at getting them to grow. But I figured, “Why not?”,  I would try one more time. So I broke off some of the new growth and took them home and stuck them in a jar of water in my greenhouse. For two and a half months it looked like absolutely nothing was happening. No roots were growing. There was no visible change. They looked like a bunch of lifeless sticks. Two weeks ago, I almost threw them out. But instead I scratched one with my fingernail and could see that it was green beneath the bark. So I gave them some more water and just left them alone. One week ago, I was so surprised and delighted to find that they were budding! So I stuck them in soil and am hoping that they will grow some roots and I’ll have my own kiwi’s to harvest in a few years. 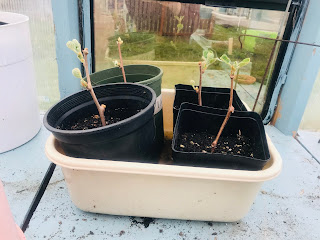 I tell you this story because I don’t want you to give up hope!

I couldn’t see what was going on inside those kiwi starts. Just like you don’t know what is going on on the inside of what you are working on. Every time you remind your child to say “Please?” you are making an impact. Every time you make a healthy food choice you are working towards a healthier you. Don’t give up because you aren’t seeing immediate results. Every effort makes a difference!

“Let us not become weary in doing good, for at the proper time we will reap a harvest if we do not give up.”
Galatians 6:9

So mama, please don’t give up when your potty-training toddler has peed on the floor for the fifth time today. He will get it. Don’t give up when your pre-teen stomps down the hallway and slams the door. You both will get past this. You are doing a good work, and if you keep on you will receive the reward for your labors. Sometimes it takes a long time to get to the harvest, but you will get there!

I hope today is full of victories for you, but if it is not, don’t give up!!!