I keep giving my son a pink plate for breakfast.

Not every day, but every few days, and he does not like it!

The first time, he complained, maybe shed a few tears, and ran back to his bed to pout. I told him that he could either stay in his bed and have no breakfast or eat off the pink plate. One of his sisters was sweet and offered to trade, but I told him that it wasn’t an option.

“You get what you get and you don’t throw a fit” is one of my parenting mottos. My son is a complainer. He has no filter on his mouth and says whatever he thinks (my husband says that my son says what everyone else is thinking but is too polite to say, haha). While I want him to be open and honest with me, I don’t want him to be a person who focuses on the negative side of things. So I started using “Pink Plate Therapy” on him more often.

Right now we are listening to the audiobook Pollyanna. Have you ever read it? Maybe you have seen the movie? I never have, but we are loving the book. The part I love the most is The Game. The Game is all about finding something to be glad about in every circumstance. Pollyanna’s father taught it to her, and after he passes away she moves in with her aunt and teaches The Game to all her new friends. All kinds of good things start happening in the lives of the people who play The Game. A couple with children decides against divorce. A grouchy old man decides to adopt an orphan boy and it changes his life. The impact of The Game goes on and on.

The smell of pancakes wafting through the house and the growl of his empty stomach eventually brought my son back to the pink plate. And though he had a scowl on his face, he ate off the pink plate. He had a few more dramatic reactions, but he’s now gotten used to the fact that sometimes life throws you a pink plate. But the food still tastes the same.

“Pink Plate Therapy” is tough. I’ve been going through a lot of it the past few years. I’ve been guilty of throwing a fit at God about the cup that He has given me. Afterwards I realize that I’ve been acting like a toddler who got the red cup when she wanted the blue one. And then I think of the children around the world who would love to have any cup, and any clean water to drink from it. Life could always be worse. Seems like there is always someone who has it tougher than you do, and if you stop to be thankful what you do have it makes going through the tough times more bearable. 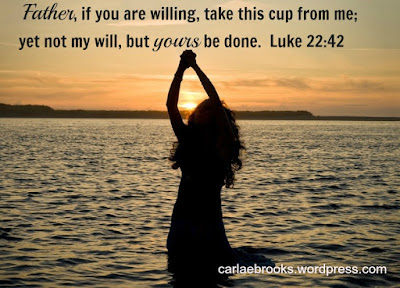 When Jesus was in the garden before he was arrested, he asked God to make a way to keep him from suffering, but he also thoroughly put his trust in his Father to decide what was best.

I really want my son (and myself!) to be the kind of people who trust that God knows what He is doing no matter what color of plate we get, and to be thankful for the good things that we have no matter what is going on. So we will continue our “Pink Plate Therapy”. 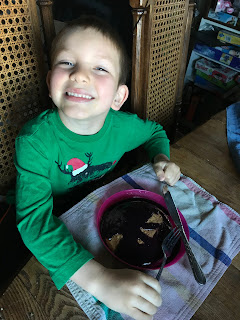 What do you do to help your kids to be thankful for what they have? I would love to hear.