We Get What We Need

By Lee - June 04, 2019
About two years ago I decided to give away my baby clothes. I was dealing with health problems and knew that I wouldn’t be able to have another baby for a while, if ever, and felt like I was being selfish by just keeping the clothing in storage when there was someone who could use them at that time. It was a hard thing to do. I had baby fever so badly, but I wasn’t brave enough to try to have a baby when I was dealing with the pain I was in. I decided I would keep one tote worth of clothing “just in case”. Trying to decide which of the precious little outfits to keep was tough. I remember holding the sleep sacks for a long time. There was one in particular, it was white and said “baby” on it, that all my babies had slept in. With a heavy sigh, and a few tears, I put it in the giveaway pile. 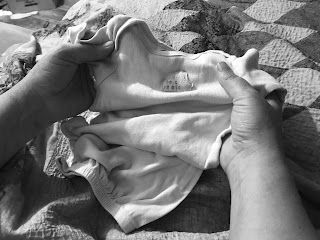 It wasn’t the clothing in itself that was hard to get rid of, it was all the memories attached the to the clothing. And the thought that I may never cuddle up close to nurse a sweet baby wearing that sleep sack again. The baby years go so fast, we all know that, and they are such precious years. They are a lot of hard work, of course, but I hear so many women sigh for them after they are gone, and that’s how I felt.

When I found out that I was going to have another baby, I really regretted getting rid of those sleep sacks. They were so convenient! No messing with snaps or zippers when you were sleepy and blurry-eyed during the middle-of-the-night diaper changes. During the past few weeks I have been especially worried about not having any. I’ve looked at second hand stores for them, looked for them at Walmart and Fred’s, looked for patterns to make them myself. I could order them online, but they are awfully spendy. I didn’t mention my desire for them to anyone. I didn’t get any at the baby shower that my church threw for me. Finally, I resigned to the fact that I might not have them, and decided that I would make do with the regular jammies that had been given to me, but still offered up a quick little prayer that some would come my way.

You guys, I have been given so many sleep sacks this past week that I have enough to pass some on to a friend who is expecting a baby around the same time as I am!

Isn’t that amazing? It really is true that God often gives us the desires of our heart, sometime even before we voice them. God knew I wanted another baby so badly, but He also knew I was afraid of the pain I would experience while carrying that baby, and yet He decided to give me one anyway. He knows our needs and He knows the perfect timing to fulfill them.

What do you need right now? Maybe it’s big, like a new car or home. Maybe it’s small, like my sleep sacks. Whatever it is, just ask for it. Doesn’t hurt to ask, does it? He loves you and He knows your needs.

“Take delight in the Lord, and He will give you the desires of your heart.”
Psalm 37:4