I just wanted to give a little minimalism update to let you know how the house simplifying is going.

First, my house FEELS different! It feels big and bright, airy and peaceful! It's super easy to straighten things and clean up. I feel like I've completed "Layer 1" of getting rid of stuff.

I think one of the biggest things that has changed physically is I got rid of several pieces of furniture. When downsizing, I just didn't NEED space to store extra stuff, I just got rid of the stuff. That has opened a TON of space up in our room. I've got rid of one or two pieces of furniture in almost every room of the house and it feels so nice!

So here's a little Picture Tour of just the main living areas.
I wish I had before pictures for you but I'll just explain as we go. 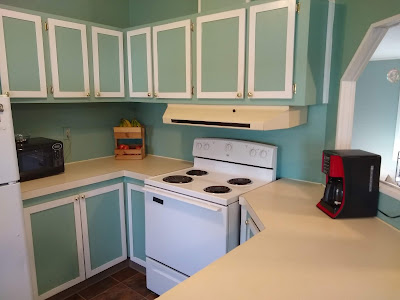 So here is my kitchen as of right now. It used to have lots of stuff on top of the cupboards and lots of stuff on the counter. I wanted to clear the counters as much as possible (inspired by Joshua Becker's suggestions). It was hard to find places for everything that was out and about but as I got rid of stuff it made room in the counters. We settled on having the microwave, fruit basket, and coffee pot on the counter top. Everything else we try to keep put away. Things like the toaster, can opener, butter, paper plates and napkins (that lived on top of the fridge) all found a place inside the cupboards. 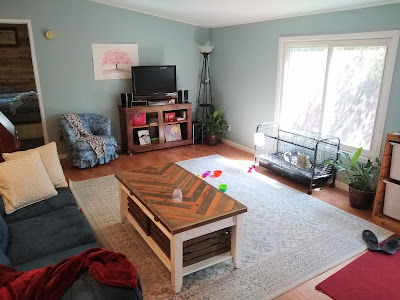 This I'm really proud of! We got rid of a love seat, large speakers, and a bulky TV stand, and a set of storage cubes. We added a small chair that we already had, and a heirloom cabinet that became our tv stand for now. If you can see there's things out (kids toys, a sippy cup bottom, and flip flops) right now but that's life. It's not supposed to have nothing out but having less certainly makes cleaning up better! 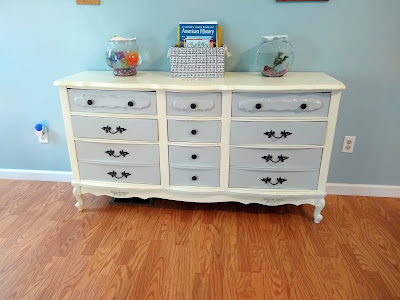 So THIS is my very first furniture refurbish that I did 4 or more years ago and it's been in our home ever since. It is the home of ALL our homeschool stuff, which is pretty awesome. It also holds my husbands stuff drawer, and the junk drawer which has fish food in it. Hehe.

So that's it for today. My room is still a work in progress since I have a dresser to sand and paint first and our bathroom is still being finished up from the remodel.