You guys are making my lose my marbles!!!

Have you ever said this to your kids?

If I ever yell this at my kids, I will, quite literally, lose a marble.

At the beginning of this year my hubby and I decided to start what we call The Marble System for our family. We have always raised our children to take responsibility and help around the house, but it was really on my husband’s heart to instill a system that positively reinforced good attitude and teamwork. We’ve had to do a little tweaking to our original plan over the past few months, but the system seems to be working pretty well, so I thought I would share it with you.

1.    Everyone decorates a jar for their marbles (we used mason jars). This is a fun activity to do while you are explaining the system to your kids. We bought the “marbles” from the Dollar Store (I believe they are called glass beads; ours were by the floral and craft section). We also decorated a big pickle jar to hold all the marbles that we needed at the start of the month.


2.    Come up with Personal Prizes and Family Prizes. We have four children who are participating, so we let them each come up with four ideas as Personal Prizes. It was really cute and fun to hear the things they came up with, what they considered would be a treat and worthy of a month worth of work. We printed these up and cut them in strips and put them in a little jar. Then we came up with Family Prizes, each person got to create one. The idea behind a Family Prize is that it will encourage your children to encourage each other to meet their goals. For my hubby and I, whomever gets the most marbles between the two of us gets to plan a date. 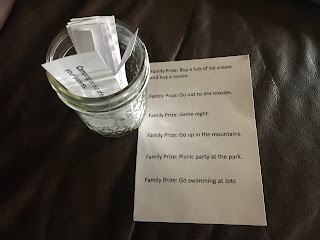 3.    Decide how many marbles can be earned a day. Our system allows up to 6 marbles to be earned for daily chores, 3 for school (on weekdays, of course), and 1 as a bonus. My children typically do chores in the morning and in the late afternoon/evening, so I divided it up so they have the potential to earn three marbles for each of these time frames. If they do the chores they get one marble regardless of how their attitude is. If they fuss or act out or have to be reminded more than once, they lose a marble and only earn two. If they do a fantastic job they get the whole three. The bonus marble can be awarded for extra schoolwork done or extra work done with a really good attitude.

4.    Set a monthly goal. This is the amount of marbles that each person has to earn in order for a Family Prize to be won. Put a line on the jars to show where their monthly goal is (we originally chose 180 as our monthly goal for the kids, but just recently lowered it to 170 to see if that would be more attainable for them; my husband and I each have a goal of 50).

5.    Don’t forget about yourself! My hubby and I chose three areas that we wanted to work on, too. We each can potentially earn three marbles a day: one for exercising at least ten minutes, one for not yelling at the kids, and one for having devotional time. I think this step is important because it shows your kids that you are working on yourself as well.

6.    At the end of the month, count up your marbles! The kid with the most marbles gets to choose their Personal Prize first. Then the next highest does, and so on. If everyone meets their monthly goal, we vote on a Family Prize!

7.    Tweak the plan to make it work for your family! As I said before, we changed our monthly goal and may change it again. We want to find one that is attainable, but not too easy. Also, we changed how and when we gave out the marbles. My husband wanted instant gratification for the kids when they did their chores, but sometimes chores get interrupted I found it too difficult to keep track of who had gotten their marbles and who hadn’t. So we changed it so that at the end of the day, after they brushed their teeth, I evaluated their performance and told them how many marbles they could put in their jars for that day. The best tweak that I have done so far was to benefit my 4 year old. He was performing the lowest out of everyone, and yet was excited to get his average 3-5 marbles a day, because that seemed like a lot for him. Finally, halfway through February, I decided to put the maximum amount of marbles he could earn a day (10) into a little jar by the big marble jar. Then, when he would be disobedient, I would have him go put one of those marbles back into the big jar. He was able to see himself losing potential marbles and helped him understand better how much he was missing out on. His behavior those last two weeks of the month was significantly better.


So that is our Marble System. I’m sure there are a lot of other systems out there, but this one is working pretty well for us. It doesn’t take a lot of work on our part or planning (once you have your marbles, jars, and prizes printed out, you are set). So I thought I would share it.Do you have some kind of allowance system for your kids? I would love to hear about it.