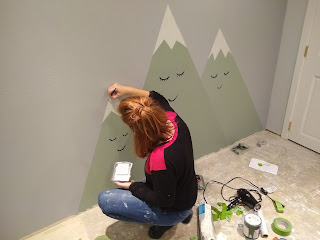 We moved into our new house the very beginning of October and we've been busy with nonstop projects ever since. My current project has been the most fun, making a PLAYROOM for the kids!
Our downstairs used to have a kitchen/bar area and we fully gutted (minus the drywall) and are remodeling it. My husband took on the heavy jobs of cabinet removal, capping pipes, and removing outlets. I did the finer work like mudding, sanding, texturing, and my favorite, painting. 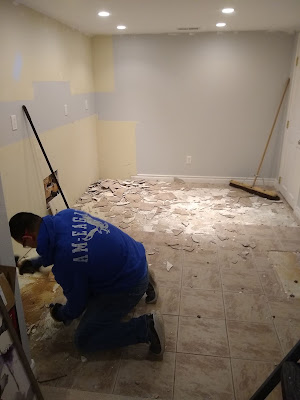 I was super excited when we got to the painting stage because not only did I like the wall color but I had a fun project in store. A mural! This was the playroom after all so I felt free reign to get creative and have fun with it.
I chose a geometric mountain scape after searching the internet for ideas. I poured over paint colors and made a small prototype of what I was envisioning. Then I made a sketch and went to work taping out the design.
Now, here's the thing.
1) I've never painted a mural
2) New things intimidate me

After, I taped out the design as best I could I began to paint the larger mountains behind and immediately realized I'd picked a color too similar to the existing wall color and had to change colors to a deeper gray. Next, I had to figure out how to make my three overlapping small mountains stand apart which led to mixing two colors by hand instead of just one. 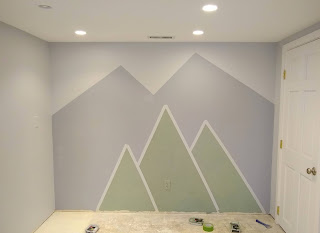 I did a few coats which was simple enough. Paint, dry, move tape, paint again. Till I reached nearly the end of the project... My most dreaded part of any project, the details. It's always the details where everything goes wrong.
I painted the snow caps but they were the wrong color, so I had to repaint them. I repainted the mouth of one mountain three times before it was satisfactory and then, after all that, there was all the bleed through paint that had escaped the tape...
As I took out one of my small art paintbrushes and carefully poured over each dot of out of place paint, I thought about this project.
First, I'm so glad I tried it!

I had been so intimidated by the size of this project but as soon I had begun, was really glad that I'd taken the risk and done it. 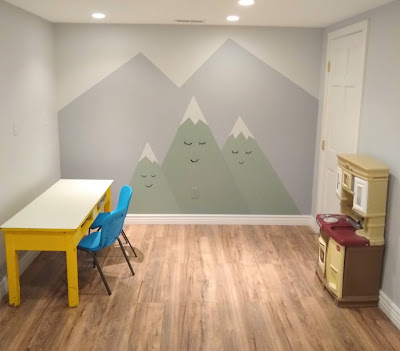 Two, painting is like anything else in life; We make mistakes, we aren't perfect. I used to find this a direct reason not to do stuff, art included, and now I realize it's just part of the journey, we just get better at fixing the mistakes as we grow and increase our skills.
So, Mama, just try it! If there's something you have wanted to try, do it. Of course it won't be perfect, but it'll be worth it.
Much love,
-Joy