By Lee - December 28, 2020
It was time to goooooo...we were running late.
Christmas Eve is a big day of celebration in our family. A day jammed full of fun. And we were behind schedule. We needed to get up to my Oma's house. We were already 30 minutes past when we said we would be there!
My daughter was working on her last present for my mom. She had painted her a hummingbird on a blue background. There was a lot of empty space, so I suggested she use a paint pen to put a message or verse on it. She got very excited. She loved the idea.
The problem was that she wanted to write John 3:16 on it. The WHOLE verse. 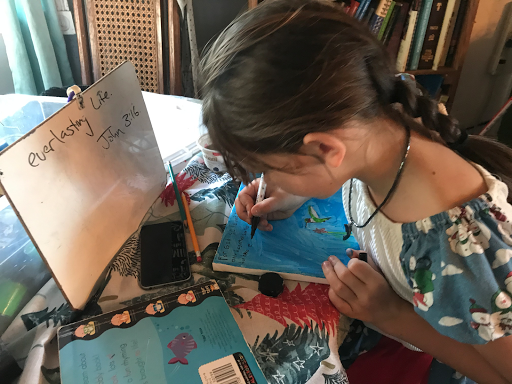 We were running late. She was insistent. I was short with her as I explained there wasn't enough room for that long of a verse. She told me she planned to write small. I told her that she can't write too small with the paint pens or the letters would run together. She told me that she knew that. I sighed and huffed and wrote out the first part of the verse on a white board for her, suggesting she just do that much. After her refusal I begrudgingly wrote out the rest of it.
"See??? Do you really think you can write this whole verse in that space???" I asked impatiently.
"I'm going to write small." My daughter can be bulldog stubborn sometimes. My husband saw my impatience and reasoning and tried to talk to her. She just started crying and insisting that she could do the whole verse because she was going to write small.
Then I realized what jerks we were being.

This was HER gift, after all. SHE was the one who would have to deal with the disappointment if it turned out poorly, and SHE would also be the one who would deserve to be proud if it turned out well. And my mom would love it either way because it was made for her by her granddaughter. So why the heck were WE stressing about it so much????
"You know what, honey, let's just let her do it the way she wants to. I'm sure it will turn out great." I said in a totally positive tone. I also told my daughter to dry her tears and get writing because I was setting a timer for five minutes. She got it done a little over that time, but we were out the door shortly after and carrying on with the day. And my mom, of course, loved the painting.
I am so guilty of rushing my kids at times. And so guilty of underestimating them, too. This incident was a good reminder to keep the big picture in mind. A reminder not to crush my daughter's little heart just because I am running behind. A good reminder to trust her judgement and self confidence more often.
I hope I will do a better job of this next time. Maybe it can be a New Year's resolution.
Much love, mamas!
Lee