A about a month ago, my kids were exposed to chicken pox. I was excited because I really wanted them to get it and get it over with. Since I knew exactly when they had been exposed, I was able to plan for them to still enjoy our normal routine for the minimum 8 days it would take for them to be contagious during the incubation period and then we needed to be quarantined for a couple weeks to see if we had successfully contracted it.

I was not looking forward to quarantine. It's almost like a bad word for me. However, I figured it would be a good time to get caught up on some school and housework and yard work. My parents were not afraid to come around us and the kids were able to play with the friend that had exposed them to chickenpox and another friend who had been exposed, so we weren't completely isolated.

Still, I thought I should put something on the calendar to help substitute for the things we had to erase (church, crochet class, Awana, dance, and homeschool meetup). So I decided to write Camping on the three days that were right in the middle of quarantine. That would give us something to look forward to for the first half and something to recover from for the second half.

We talked over where to camp and decided to choose a secluded place just in case one of the kids came down with spots, so we couldn't get anyone else sick. I made a big order to pick up from the store while the kids were at their last Awana meeting and went through our camping gear to get everything organized.

Then my Denali died...again...The kids ended up missing their last meeting, I had to use my husband's car to rush down to get the groceries just in time, and then we follow the tow truck as it hauled my vehicle home. It's kind of depressing to see another vehicle carrying the vehicle that is supposed to be carrying you...sigh...but what can you do? Car trouble is a part of normal life and it's going to happen at times. A very inconvenient and expensive part of life, but a part of it nevertheless. Our Denali had to be towed to another town because our local mechanics aren't familiar with the hybrid system, but I decided to continue with the scheme of our camping trip. Thankfully, my husband had just purchased a new-to-him car, so that freed up our old minivan. It has its share of problems too, but runs, and my husband thought it could handle the trip.

Getting everything into the van was a challenge, but we made it happen. The van actually has more storage room than the Denali, especially when we leave one of the van seats out, so that was a blessing.

So into the mountains we went. The place we had chosen we fondly call "Our Spot". We had discovered it during hunting season a few years ago and had camped there once before. It was down an old logging road and had a little pond and a tiny brook that comes out of it. There is a trail that goes around the pond and lots of open forest for the kids to play in. The days we had chosen for camping were my husband's work days so it was just the kids and I. 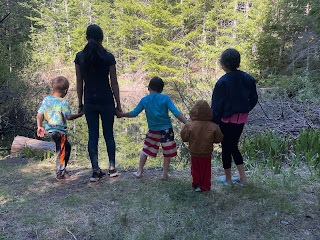 My oma was a little upset about me camping alone, in not the most dependable vehicle, nearly two hours up into the mountains, in the middle of nowhere. But I have driven that area so many times that I knew where all the tiny cell phone service spots are and knew a quicker way to get back to civilization if I needed help. So I wasn't worried.
And I'm glad I wasn't, because the trip was soooo good! It was really cold at night and I was pretty sore after packing everything up the last day, but those are the only two negative things I can say about our experience. The rest was pure fun. The kids had a blast, I was able to finish up a book I had been reading forever, and I got some super fun photos that I look forward to scrapbooking down the road. Not to mention all the distraction free time I got to focus on my kids. Oh, and my mom ended up able to join us for one of the nights, so that was fun too (and made my oma feel better).

Sometimes life throws you curveballs. That's just the way it is. Sometimes we let those curve balls throw us off balance and off course (I'm totally guilty of that). And sometimes we rally and decide to continue on with our plans in spite of the obstacles. It usually ends up being totally worth it. Stubbornness can be a really good thing at times.

I just want to encourage you, mamas, to fight for the things that are important to you, in spite of whatever may be trying to obstruct your path. Sometimes doors are closed and others are opened, I get that, but other times I think the enemy of your soul is just trying to discourage you from your dreams. Don't let him win!