For Better or Worse

Some moments of motherhood are almost magical.

I took the kids camping again, this time with friends. Three other mamas and I spent the past five days and four nights at the river. It was a very enjoyable time.

One of my favorite parts was a memory that I will cherish forever. All of my 4 older children were very cautious of water when a toddler. Two in particular wouldn't even start really playing in the water until they were four years old. And we go to the creek or river at least once a week throughout the summer, so it's not as though they didn't grow up around water.

But my almost-two-year-old is a totally different creature.  When I first waded into the water this week he started complaining from the shoreline. "Oh dear," I thought, "He doesn't want me in the water because he is scared." But it was actually the opposite. He didn't want me to leave him on the shore, he wanted to go in the water with me!

So I spent much of our river time with the toddler in the River Run, drifting through the shallow water and enjoying his discoveries of this whole new (to him) world. It was so fun! And one particular time he was feeling especially sweet and kept saying "Wuv you, mommy!" and kissing me. He appreciated the moment nearly as much as I did, I think. It is one I will have stored in my heart forever. 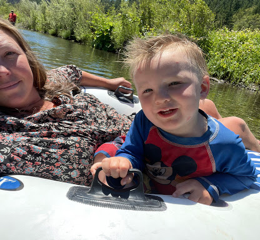 I have just returned from a totally different mothering experience and I'm still a bit shaken up from it. Our library has an amazing summer reading program that we have participated in since my oldest was a toddler, and we enjoy all the activities that they put on for our small town. Today was their launch party, which included sign up T-shirts, a bounce house, and several different types of fun crafts for the kids to do.

Everyone was having fun. Everyone except my 7-year-old (who has OCD). I had taken all the steps to help prepare him for the event beforehand: written it on the calendar, explained what activities would be happening, and told him he didn't have to participate but that we would be going because everyone else wanted to and Daddy had other errands to do. Apparently, it wasn't enough.

His behavior was terrible from the moment we left home until the moment I finally took he and the toddler to the car to wait for the three others to finish their fun (I'm thankful to have a 12-year-old who is responsible enough to leave in charge of her siblings!). You would think he was going through the terrible twos by the way he was acting: hurting siblings, throwing things, physically resisting me, whining about every little thing...ugh, it was hard to handle. When I finally took him to the car, we were both crying (I'm also thankful for my big sunglasses to cover my tears!).

The whole hang up was that he had a project going at home and he didn't want to do anything else or be anywhere else except at home and working on that project. He had that stuck in his head and was refusing to work past it, no matter how patient and kind and encouraging I was responding. OCD is a very difficult thing to battle, both when you have it yourself and when your loved one has it.

When I was married the term "for better or worse" was included in my vows, and I feel like it was in the silent vows my heart spoke over each of my children as I held them in my arms for the first time. Or maybe even before that, when I saw the positive test or their first ultrasound or felt their movements inside of me. I feel like our mama hearts say it over and over again, every day, as we help them through their ups and downs.

Life can be very, very sweet, but it can also be very, very hard. I just want to encourage you, mamas, that if you are going through a hard season right now, to look for the "better" moments. The smiles, the giggles, the childish wonder. Those precious times will help carry you through. I also want to encourage you to look to your Creator, who will give you the strength you need to get through the "worse" times.

Your mama hearts are so fierce and amazing! Thank you for loving your children.