A Tale of Two Sundays (Part 2)

Hello again, ladies. So last week I told you about a pretty stressful Sunday. I kept my cool fairly well externally that day, but I really felt like I didn’t internally handle it all that great. I get a passing grade because I did remember to be thankful for the things that did go right and I also didn’t yell at anyone. However, let me tell you about last Sunday.

Sunday #2: We got home from an overnight trip around 10:30 the night before and the baby is working on his big front teeth, so another night with little sleep, but I was so happy to be going to church that I was singing worship music as I made breakfast. Two of my boys told me they were having tummy trouble in the bathroom, so I decided we would distance ourselves during worship and head home right afterwards just in case we were sick. I told myself that their tummies were probably just not happy because of the junk food we had on the trip.  The toddler inconveniently had to poop again, just before going out the door, but instead of impatiently tapping my foot as I waited for him to be done, I used the time to load the dishwasher. We worshipped to Crowder music on the way into town.

Just as we turned onto the street where the church is, one of my boys, who sits in the very back of the vehicle, told me he was going to throw up. I urgently told him to use the garbage can (a plastic vinegar jug that has the top cut off and is bungee corded to the back of the seat in front of him) but he didn’t get it in time. The aroma filled the car as I pulled into the parking lot. I quickly rolled down the windows, threw some clean cloth diapers at my son so he could sop up some of the mess, and went into the church to tell my hubby what had happened. Even though he heard my proclamation of sickness, a kind older gentleman excitedly told me he had something in his truck for me. I hesitated a moment and then decided to say, “Thank you! I’ll follow you out.” All the time it took for him to get to his truck and get the fishing sinkers he had made for me and for me to thank him again, I was thinking about the mess I wanted to get back to as soon as possible so I could clean it as soon as possible.

As I was backing out, my Pastor’s wife came hurrying out to see if I wanted to use some of the church’s cleaning supplies. I thanked her, but decided that I would just do it all at home so the poor kid could get to the bath. 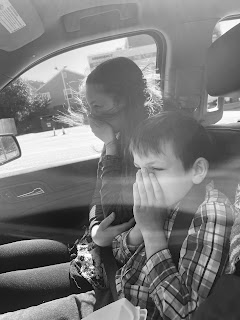 “I guess I will just have to worship in the chaos today!” I said as I drove away. It was cold, windy ride on the way home and my poor son in the back seat cried the entire time. It must have been so terrible for him, covered in puke and freezing. Even with all the windows down, it was all I could do in the front seat to keep from gagging. The cleanup wasn’t fun either, but I remembered to keep worshipping during the process and managed to not get sick myself. And I’m thankful that my car and his car seat are now nice and clean.

The day was full of many of the normal inconveniences: sweater snagged on a nail, kids left the greenhouse open (again!), toddler being defiant, and the baby trying to sabotage me by pounding the keyboard as I worked on last week’s blog, so on and so forth. Normal stuff that we all deal with every day, and I just kept worshipping during the chaos. I was rocking it! And then bedtime happened…

Ladies, I tried everything and there was nothing I could do to make that baby get to sleep. I was sure it was his teeth so I gave him medicine and even that didn’t help. We would get to where we were both dozing off and then he would fuss again. I was so dead tired that I started crying and asking God why He thought I could handle this because I wasn’t handling it well at all. I was so frustrated and so tired and so pathetic. Totally not worshipping in the chaos.

After my little fit I just kept pacing the floor and singing a worship song and he finally gave up the fight. Then I got a 3.5 hour break, which is the longest he has slept without me in quite a while. Which goes to show that God has mercy on us, even when we mess up.

Things turn out a lot better when you worship in the chaos, mamas. It may not change the circumstances, there is still yucky puke and a fussy baby to deal with, but it sure as heck makes the process more enjoyable. And it brings you closer to Jesus. What could be better than that?